Coochbehar was the only princely state of undivided Bengal. By the treaty (1773) Coochbehar became a feudatory state and agreed to pay annually half of the revenue to the British run East India Company.Coochbehar district in the North eastern frontier of India is included in Jalpaiguri Division of West Bengal. Until the 28th day of August 1949, Coochbehar was an Indian state ruled by the Manaraja of Coochbehar who had been a feudatory Prince under the British Government. By a document dated 28th August 1949 Maharaja Jagaddipendra Narayan of Cocchbehar ceded his territory to the Dominion Government of India. The transfer of the administration to the Government of India took place on the 12th day of September 1949, from which date Coochbehar was ruled as a Chief Commissioner’s Province by a chief commissioner appointed by the Government of India. By an order under section 209 A of the Govt. of India Act of 1935, Coochbehar was transferred and merged with the state of West Bengal on 1st January 1950. Since then Coochbehar is being administered as a district of West Bengal.

History of Education In Coochbehar

The Maharajas of Coochbehar in different times maintained the traditions of Hindu Monarchy of granting Patronage to learning and letters. The earliest of such tradition dated back to the 14th century when Durlabhanarayan was the king of Coochbehar. No real history of the King is available but the manuscript of a book written by Hema Saraswati states that he was a king of Kamtapur which was the residence of the writher Hema Saraswati. Hema Saraswati wrote two books, viz. Narasimha Purana and Hara-Gouri Samruda. Harihar Vipara and Kaviratna Saraswati were two other poets of the coast of Durlabha Narayana.Harihar Vipara translated the Asvamedha Parvan of Mahabharata and Kaviratna Saraswati translated the Drona Parvana of the same epic. Begining of Modern Education In Coochbehar.

Before the time of Maharaja Narendra Narayan, the patronage of education given by the Coochbehar Coest encouraged Sanskrit learning while Persian was taught in the royal family for state purposes. Education was thus kept confined within the bounds of an aristocracy in and around the coast. In 1857, a vernacular school was started in Coochbehar town for the purpose of importing education to kinsmen of Maharaja. In 1861, Maharaja Narendra Narayan founded Jenkins school in recognition of the good service rendered by the colonel Jenkins during the minority of the Maharaja. Initially it was a English medium school but subsequently it became a Bengali medium school. In 1881, Sunity Academy a Bengali medium Girl’s School was established. In the year 1888, the first college was established in Coochbehar, named Victoria College.At present in Coochbehar sub-division there are one Agriculture University, four degree colleges, two B.Ed colleges, one Basic Training college, one Polytechnic Institute, one ITI institute. There are nine Boy's Higher Education schools, eight Girls Higher Education schools, and one co-education High school. There are four English medium schools of which one is Dooars International Public School.

The concept of a traditional school reimagined in a modern way. 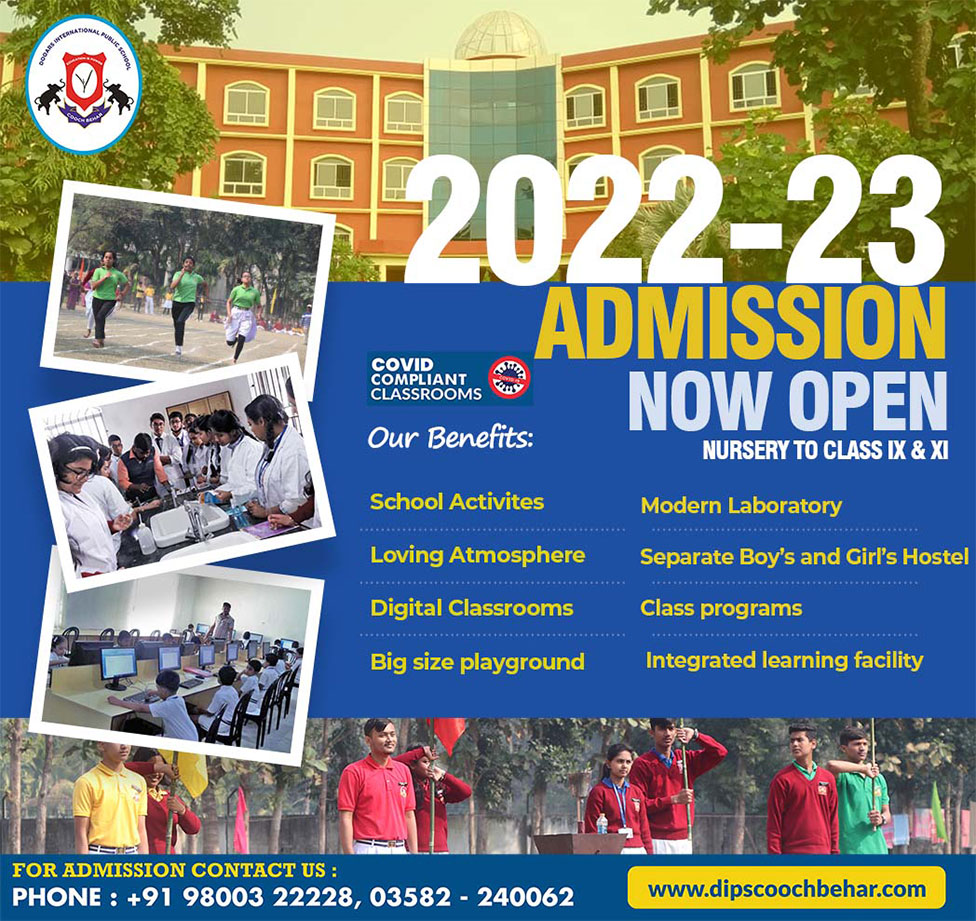 Have a question? Ask us